When it comes to coaching sailors, Brian Todd is quick to credit the athletes, stating that observing each sailor’s unique talents is one of the best parts of the job.
“I look at my position as a coach as a facilitator to create an environment for the athlete to succeed,” says Todd. “They’ll do the winning.”
Todd started out as an athlete himself, competing in sailing internationally in the Finn class as a member of Team Canada from 1973 to 1977. With a passion for windsurfing, and business ventures related to the sport, he got his start with coaching in 1983 with the national windsurfing team. He soon fell in love with coaching and made it his full-time career, contributing his knowledge, encouragement, and positivity to an impressive resume of teams, events and organizations.
This resume includes the Canadian Youth sailing team, Team Nova Scotia at multiple Canada Games, the Pan-Am bronze-medal-winning men’s team in 1987, the Head Coach and Technical Director positions at Sail Nova Scotia from 1991 to 1999, and Paralympic appearances in both 2008 and 2012 as Canadian Sailing Team Leader.
At the 2008 Paralympic Games, Todd contributed his expertise to athlete Paul Tingley’s gold medal win—the best result by a Canadian sailor at any Olympic or Paralympic Games.
“He was always pressing you to do better,” says Tingley, who began his athlete-coach relationship with Todd in 2005. “He always found ways to improve. Always happy, never satisfied is what I think of when I think of Brian.”
In addition to Tingley, the long list of Olympians Todd has coached includes Danielle (Dube) Kennedy, Lisa Ross, Erin Rafuse, Jacob and Graeme Saunders, and Oliver Bone.
“The province of Nova Scotia performs way above its pay grade in terms of international sailing success,” says inductee Andreas Josenhans, who is a member of the World Champion Dexter sailing team. “It’s because of the mentors in our sport […] and Brian is the leader of the pack.”
“He knows how to push those buttons of the sailors that he coaches so that they can be the best that they can possibly be,” says Tingley.
Hall of Fame sailing team Judy Lugar and Morag McLean, met Todd when their Olympic aspirations began to take shape in 1985. Todd provided the pair with advice and feedback, encouraging them to focus on mastering their basic equipment to develop the best possible boat-handling skills—a strategy that they credit for their 1986 World Championship win.
“He is very focused and he always leaves you with something really clear to work on at the end of the day,” says Lugar.
Lugar also praises Todd for his stamina when coaching in physically demanding conditions, often requiring him to stand in small boats on the water for hours at a time:
“I think one of the most outstanding things about Brian is his endurance. He will coach and he’ll go out there in the nastiest weather […] and that is one of the things that really stands out to me with Brian—his ability to keep a really high level of quality coaching for a really long period of time.”
“You’re on the water and it can be really windy, and really cold, […] and you’ve been out there now for seven days, day in and day out,” explains Josenhans. “You’re absolutely exhausted, and the question you should never ask—‘Why am I doing this’—is foremost in your brain, and then Brian comes over in the coach boat and he’s got this big stupid grin on his face, and somehow he turns what was challenging into ‘now we’re having fun.’”
“Kudos to my family for allowing me the time to do that,” says Todd, referring to the long days on the water. “There’s no secret to winning in any sport, outside of a lot of time. I like to coach until they are ready to stop. Every moment is a moment that will improve their skill levels.”
Todd’s legacy extends beyond coaching to include bringing world class sailing events to Nova Scotia, and building opportunities in sailing for everyone, whether encouraging young sailors, promoting sailing as a lifelong sport, providing a welcoming space for women sailors, or breaking down barriers for athletes with disabilities.
Todd retired from his Para World Sailing Committee position last year, but is still active in advocating for sailing to be reinstated as an event at the Paralympics after it was not included at the Tokyo Games. He also remains involved with coaching Paralympic groups at a regatta in Rhode Island and serves as race officer of Chester Race Week—a position he took on 12 years ago at Josenhans’ request.
Always excited to talk to sailors wherever he is, Todd’s philosophy is summed up easily in his outlook on meeting new sailing athletes:
“If they need help, I’ll help.” 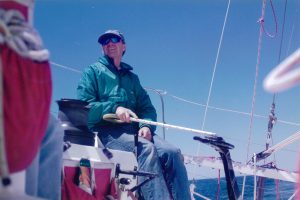 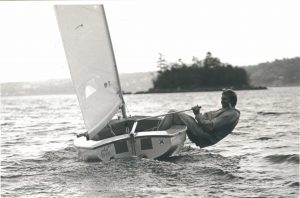